When it comes to schematic capture and circuit simulation on a mobile device, iCircuit for iOS got it right from the start. iCloud integration, intuitive touch controls, and fast application performance. Now (or Finally?), my favorite mobile circuit simulator, iCircuit, is available for OS X. 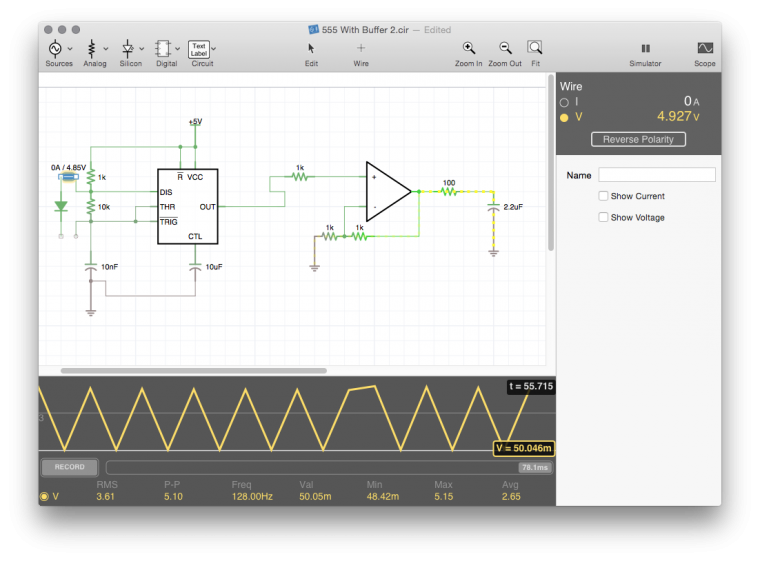 iCircuit is based on the Falstad Circuit Simulator, which sadly, is a Java-based web app. For years I’ve installed the App on my iPhone and iPad almost immediately after turning on iCloud [for Android users, that’s basically the first step of activating an iOS device].

As you build your circuits, you can see how voltages and currents interact because iCircuit is a real-time pSPICE implementation. LEDs light up, transistors show the transistor effect, and switches even work.

Load box idea I had …

Most of the basic components you need to build a circuit are there. Resistors, Capacitors, Transistors, Diodes/LEDs, and even some integrated circuits.  Often I find myself building up a circuit just to prove it actually work how I thought.

Here’s a circuit I built for a board I called “Hollywood.”  The idea was a pushbutton and LED for every pin on the standard Arduino digital I/O pins. 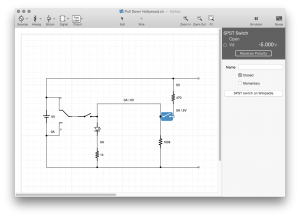 If you’re already working on electronics in the Apple eco-sytem, iCircuit is a must-have.  The iCloud integration makes it very possible to work on a circuit on your desktop and then take your iOS device into the lab.  Click the button below to go to the iTunes page for iCircuit.

Categories: Hands-On, Hardware Design, Software
Disclosure of Material Connection: Some of the links in the post above are “affiliate links.” This means if you click on the link and purchase the item, I will receive an affiliate commission. Regardless, I only recommend products or services I use personally and believe will add value to my readers. I am disclosing this in accordance with the Federal Trade Commission’s 16 CFR, Part 255: “Guides Concerning the Use of Endorsements and Testimonials in Advertising.”