There is a project that has been sitting on my “to do” list for too long. My lab notebook has several dedicated pages for it. But I have not made progress. I decided to take some advice I have given to other people. When you’re stuck on starting a task, break down the project until you find a piece small enough you can get it done with no problem.

The project involves the Apple IIgs. It was Apple’s last 16-bit (and 8-bit) computer. Inside are some application specific integrated circuits or ASICs that make the IIgs. The name with my attention is named “MEGA-II.” It takes all of the individual logic chips from the original Apple II design and incorporates them into a single 84-pin PLCC.

I need to design some printed circuit boards combining the MEGA-II and a couple of other chips. My current step is creating a library of custom components in KiCad.

With the help of this Apple II ASIC listing and a few other resources, my project will capture the entire IIgs schematic. Of course, by the time I finish, someone will have made a python-vision script to convert these scanned schematics to KiCad automatically.

In the spirit of sharing, I streamed part of my schematic capture process. I started with a break out board for my custom MEGA-II symbol. During the stream, I realized the chip I was working with was a PLCC style. There are sockets for this package type. That realization led me to find that I could buy PLCC break out boards. Why re-invent the wheel? Also, using sockets means I can prototype with fewer MEGA-II chips. Using fewer chips means cannibalizing fewer computers.

Getting as far as I did was not a waste. Since I plan to re-create the entire schematic anyway, I can use what I made already. Also, eventually I will add other ASICs to that initial board.

What is the Apple IIgs MEGA-II Chip?

In this clip, I explain that the Apple IIgs included backward compatibility with the earlier 8-bit Apple-II line of computers. Apple’s engineers combined all of the individual logic chips that make up an Apple-II and put them into a custom ASIC. If I add a 6502 processor, some RAM, and an Apple II ROM, I have the basics of an Apple II computer.

At this point in the stream, I realized I could socket the chip. Up until this point, I assumed I would need be soldering the ASIC to a breakout board. As I said earlier, sockets are going to save me chips (and time.)

Watch Highlight: Realizing the MEGA-II should be socketed. from baldEngineer on www.twitch.tv

What is the project?

You might be wondering what project I have in mind. I will leave that open for the moment. I do have an end goal with these special chips in mind. But I’m not ready to say what just yet. 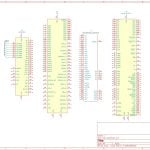