A popular LED project is the “Larson Scanner.”  This scanner emulates the effect seen on KIT from Knight Rider and the Cylons in Battlestar Galactica.  The code is usually written using “delay()” which means you can’t combine it with anything else.  The following code could be put into a function, called periodically and allow your code to scan while doing other things.

One thing to note, a proper Larson Scanner has some persistence to the next and previous LEDs, this code does not.  Maybe that would be a good exercise for the reader?

A couple of notes in this code.

The defines give us which direction the counter is running.  I used the arbitrary names “UP” and “DOWN”, but could have used “LEFT” and “RIGHT.”

To simplify addressing which pins are connected to LEDs (and in which order) an array is created with the order which the LEDs are connected.  If this is the only thing you’re doing in your project, you’ll probably have the pins in order like the example.  Using the array lets you use whatever pins are available.

The “magic” in this code is the shifting done with LEDstate.  The HEX value 0x01 is the initial state.  With each iteration, the variable is shifted once to the left or right.  So this means it’ll be:

To test to make sure the LEDs are connected correctly, I included a function to turn on all the LEDs. 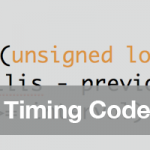 Arduino: Timing Code with Millis() as a Stopwatch 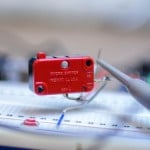