An example of when comments would have helped

By James Lewis 2014-10-07 3 Mins Read
What was one of the first things you were taught, when learning to program?  “Comment Your Code!”  And of course, like all programming students, you ignored that advice.  Or, if you are like me, you made vague comments as the lines of “variable called var.” Tonight I opened up some code I haven’t touched in two years.  Code that when I wrote it, made perfect sense to me… at the time. The code was for my binary clock project, BinBoo.  So I need your help, check out the code below and see if you can help me remember what it does!

Just kidding.  After about an hour, I figured it out.  The frustrating thing is?  After I remembered what I was trying to do, I checked, and I had an Evernote note that I wrote about it.  I just never bothered to comment the actual code.

The idea behind the code was to represent each LED of my Binary Clock in a 16-bit variable.  The function “calculateTimeBits” would take the current time, convert it to “bits” which another function would read to set the state of each LED.  On the front of the clock there are four columns, each representing a digit of time.  Some would call this a BCD (binary-coded decimal) clock. Figure 1 shows the columns and the binary weights of each light.  The time shown in this image is “20:08”.  (That’s 8:08PM).   Since I had enough LEDs and BinBoo’s control board had enough I/O, I wanted to convert the time into BCD. Problem is, I couldn’t figure out why my LEDs were getting screwed up.  Then it hit me, I was loading in the bits in one direction and reading them back out in another.  So my display was correct, except it in MM:HH  and not HH:MM!

Here’s the new code.  In addition to loading the data correctly, I added some comments so I can avoid this problem next time I want to make change.  Hopefully it’ll be in a couple of years. Much better to read, isn’t it?  Visually, you might think “hey that’s still backwards!”  Well, that’s okay.  Because when it gets displayed, the bits are “reversed”.  But, that code is for another post. What’s some code you used and later regretted not commenting?  Or, what is your favorite commenting tips?
arduinoBinBooProgramming
0 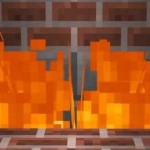