I have been soldering circuits for twenty-six years. Well, except for the last 6 weeks. I have had a Weller Zero Smog EL fume extraction unit in my lab. It has changed the way I solder. When I first used it, I thought “yes, this is nice. But not a necessity.” Then the other day I didn’t feel like moving the extractor to my secondary workbench. I was immediately irritated with myself for being lazy. The smoke was so annoying. I don’t know what else changed me so quickly.

The unit under test is the Weller Zero Smog EL Fume Extraction Kit. They sent it to me in partnership with element14 as a Roadtest review. (My previous review was on the 10 MHz Picoscope.)

Signetics started as an IC manufacturer. In 1975 they were bought by Philips Semiconductors, which is now NXP. Interestingly the address in the datasheet, I think, was the original site. Today, it’s home to a Lowe’s Home Improvement Store. According to this Wikipedia article, it was created by John “Jack” Curtis. Apparently, it was included in a real Signetics catalog as a joke! Imagine that happening today. Additional information about the joke is available on sigwom.com. (Which may be written by Jack himself, not entirely sure.)

As 2017 comes to a close, I looked back to see what readers made the most popular. It was an exciting year. The Arduino family came back together, Adafruit trolled the internet with rumors of a RadioShack buy out, and for me, I changed jobs.

Project wise I got my RetroPie SNES build completed, using an old Super Famicom case. This case is one I bought in Japan for 500 yen (about $5.) This work also led me to discuss voltage divider circuits. And I looked at a couple of scopes.

In case you missed it, here is what you as a reader found interesting over the past year.

END_OF_DOCUMENT_TOKEN_TO_BE_REPLACED

What are aluminum polymer capacitors? These are a solid type of capacitor that replaces the liquid electrolyte with a solid polymer material. Sometimes you might hear these capacitors called “organic aluminum.” Technically, they are still “electrolytic” capacitors. However, the colloquial term of “aluminum electrolytic” refers to the traditional wet electrolyte-based capacitors.

In this video, I meet with Amelia Dalton of EE Journal, and we discuss these capacitor types. Mouser and EE Journal developed the video in joint with KEMET. (Previously I talked on Amelia’s Chalk Talk about SSD Capacitors.)

For me, the release of this video is bittersweet. It is one of my last projects before my departure from KEMET. However, I am excited to talk about aluminum polymer capacitors because they represent one of the “newer” technologies when it comes to capacitors.

ArcAttack is a band that performs at the Bay Area Maker Fare, among other places. They feature massive signing Telsa coils. (Here’s a video I show when I saw ArcAttack in 2013.) Singing Telsa coils are awesome. Everyone knows that. Which is why I found when Dianna Cowern, the Physics Girl, visited the band ArcAttack, electromagnets are just as cool. In addition to talking about their music, ArcAttack’s Joe does something amazing. He splits an aluminum soda can with just an electromagnet.

There are a few other neat tricks and some slow-motion stuff too. Near the end, he compresses a quarter with the scariest magnet setup I’ve ever seen. This video is definitely worth watching if you like anything related to Tesla coils–or electricity!

The most famous example of additional hardware is the “SuperFX” chip that debuted with the SNES game Starfox. (It was in used in others in addition to a successor.) Most NES cartridges had other hardware too: mappers, sound generators, additional ram, etc. END_OF_DOCUMENT_TOKEN_TO_BE_REPLACED

If the Moon Were Only 1 Pixel

A tediously accurate scale model of the solar system 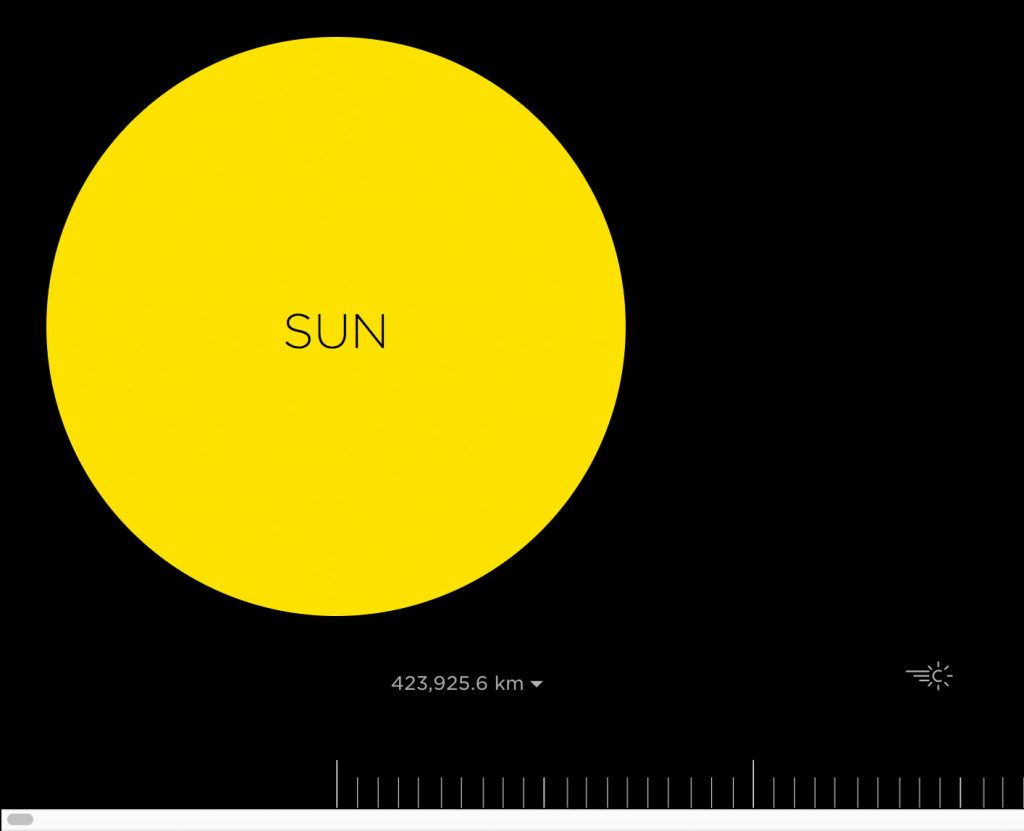 When I was growing up, I watched a lot of Star Trek. Over time I’ve looked into other Sci-Fi series. The occasional hit, like the reimaged Battlestar Galactica, caught my attention. But, for me, the voyages of the Enterprise defined “space” to me. Or the stories on Deep Space Nine. (There are no other Star Treks.)

Seeing a new alien or planet each week warps (see what I did there?) your mind to think that space is relatively small. But when you consider it takes almost 500 seconds for the light to travel from the Sun to the Earth, you begin to realize space is freaking huge.

That’s why this scrolling model of the solar system is so fantastic. It offers a unique sense of how “big” the universe really is–at least our solar system. Check it out on joshworth.com.

Ben Krasnow from Applied Science on YouTube uses his Electron Microscope to compare spinning media. The part of the video that caught my attention is the Vinyl Record. Not only does he show the groove and needle, but he puts it in motion! It’s a great look at how this technology works.

Additionally, I loved how he went into detail about how to prep the record for use in the electron microscope. (Spoiler: he had to make the record and needle conductive.) After the vinyl, he also compares a CD and DVD. The twist is that he also shows how a Capacitance Electronic Disc (CED) compares to the vinyl. You never heard of a CED?

Neither had I until Techmoan covered the RCA CED Videodisc on his YouTube channel. It appears over 1,700 movies were released in the United States alone. Check out the both videos for details on CED.

If you enjoy Electron Microscope pictures like I do, then you’ll enjoy this video.

You are probably familiar with Neil deGrasse Tyson. He is as brilliant as he is entertaining. That fact is why I was so excited when I saw his name pop-up on my queue for the Nerdist Podcast.

In the past, I suggested some electrical engineering podcasts. The Nerdist isn’t like those. Hosted by Chris Hardwick, each episode includes an interview. As the podcast’s name suggests, most of the guests have some roots in today’s nerd or geek culture. So while not an engineering podcast, there may be the occasional guest that interest you.

END_OF_DOCUMENT_TOKEN_TO_BE_REPLACED

I was invited to speak at the 11th Hardware Developers Didactic Galactic group at the Supplyframe office in San Francisco. I talked about the misconception that capacitors are a simple device.

Chris Gammell recorded the discussion and posted it via PHY Media. This video is about 50 minutes.

In this talk, I break down a few things to know about Ceramic, Aluminum, Tantalum, and Supercapacitors. You can see the full video via PHY Media’s YouTube Channel: They’re JUST Capacitors. For links and the slides, check out this post.