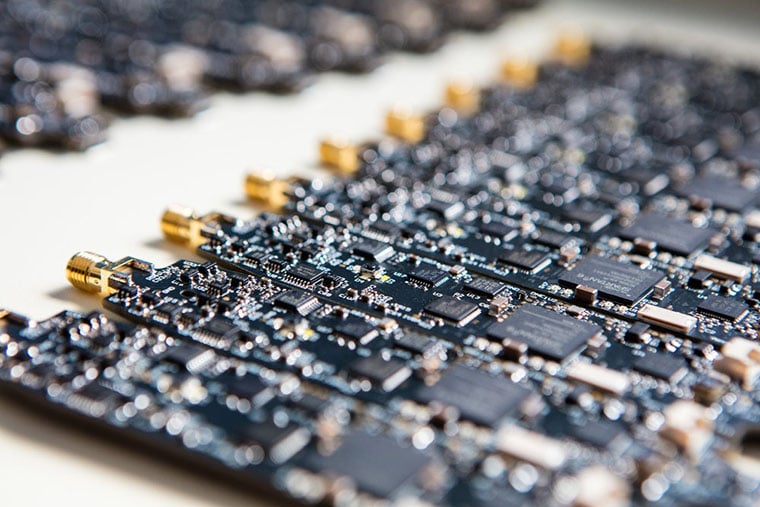 My Aeroscope review looks at the specifications, the App that runs it and breaks down the key features. Let’s probe deeper.

The input impedance is high-impedance only at 1 Mohm with 17 pF of parasitic capacitance. That is on par with what you’d see with a 500 MHz passive probe (minus the bandwidth.)

All in all, the specifications are impressive for a unit this size but aren’t anything special compared to other scopes on the market. But do not take that statement negatively. It’s a very reasonable instrument if 20 MHz bandwidth is enough for you.

This point could be the one issue for many of you. Currently, Aeroscope only has an iOS app available. I don’t want to trigger anyone, but there is no Android version yet. However, before you click away: the protocol used by Aeroscope is open-source. You can download the specification from GitHub. Their blog mentions that the Swift-based app will be available on GitHub as well, but that was over a year ago—and no code.

That said, the App itself is very basic. I used it on an iPhone 7 Plus and an 8.4” iPad. Pinch and swipe works to move the wave around the screen. 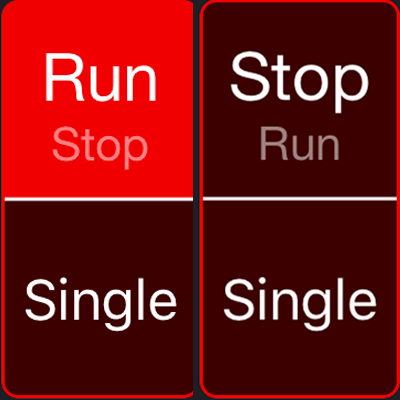 I found the Stop/Run button counter-intuitive. (We ran into this when I worked at a scope company designing front-panels.) When the acquisition is running, the button turns red. When it is stopped, it goes reversed.

Here is a cursory look at each part of the UI in detail. 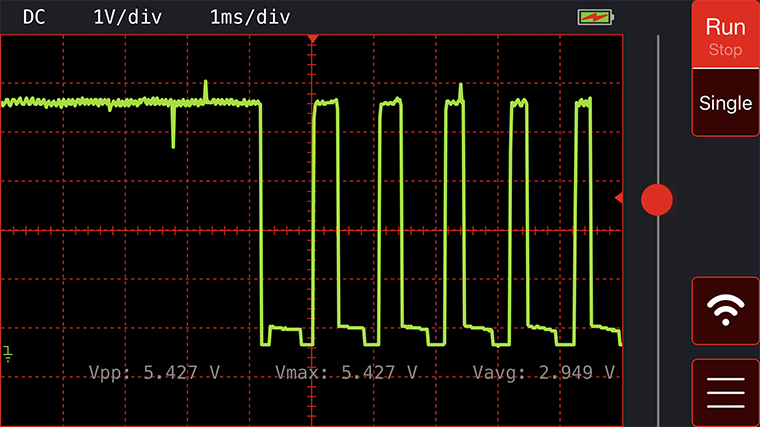 The sample rate not being shown bothers me. I think it is important that a digital scope tells you its current sample rate. This detail can help the user understand the waveform when they are “zooming in and out” with the timebase.

On fast timebases, the scope updates are speedy, and on slower timebase, updates are a bit slower. This behavior is typical with all digital oscilloscopes. If it takes a few seconds to capture the waveform, they won’t display anything until their acqusition buffer is full. 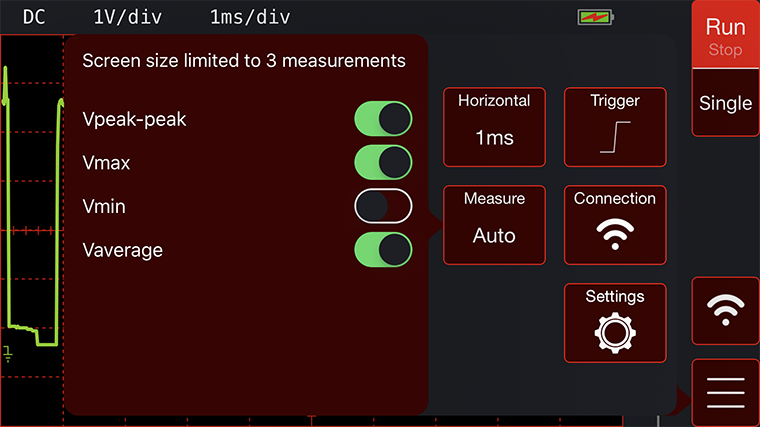 Measurements are limited to a couple of voltage measurements: Vpp, Vmax, Vmin, and Vavg. (Is that average or RMS?) I was disappointed there are no time measurements like period, frequency, or duty cycle. I’m not sure if there is a plan to add these. Personally, I don’t like counting graticules and doing basic math. I am not good at all three of those things. 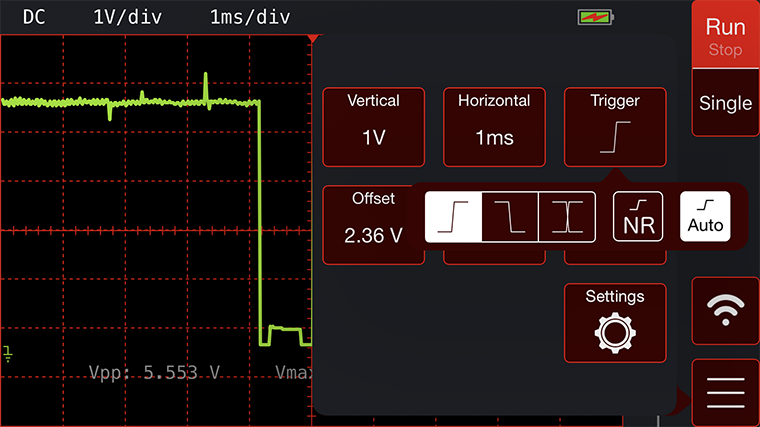 Triggering is limited to edge triggers. There are no pulse-width triggers available. This limitation might not be a deal-breaker though. As a single-channel device, there isn’t as much use for some of the other modes. You won’t be looking at a clock and data signal at the same time. On the other hand, since you CANNOT look at both, it’d be helpful to trigger on certain pulse widths. For example, when you’re looking for the start of a data train, a pulse width trigger can be used to find the time between packets. 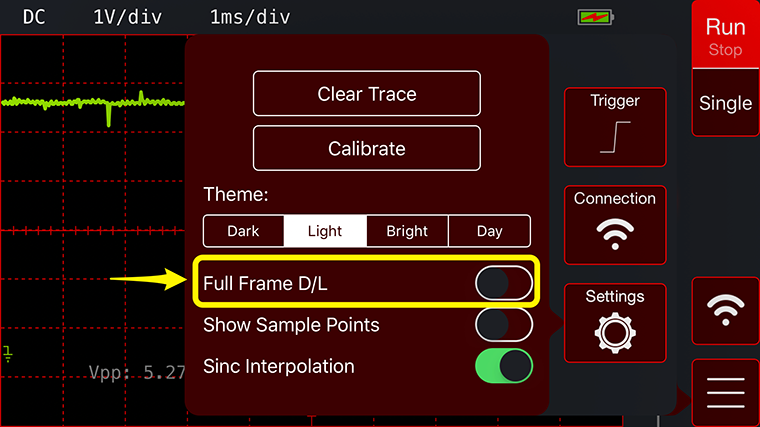 One secret scope manufacturers use on digital scopes is that they don’t offload the entire acquisition memory when they display waveforms. They will try only to use the data points needed to make a measurement or display a waveform. If you stop the scope and start looking through the capture, they download the additional information.

The Aeroscope’s “Full Frame Download” option appears to give you complete control. While the scope hardware may acquire the full 4K of samples, it may not be necessary to download them all to display. Fewer samples downloaded, means faster update rate—especially over Bluetooth.

I’m not sure how to comment on battery life yet. The designers suggest it will last at least 8 hours. Unlike the Mooshimeter, it appears you must turn off the Aeroscope when not in use. Otherwise, the internal battery dies.

Fortunately, it isn’t a big deal to plug in the USB cable and charge while you use it. Of course, this Aeroscope Review is about the wireless measurements, not the wired. 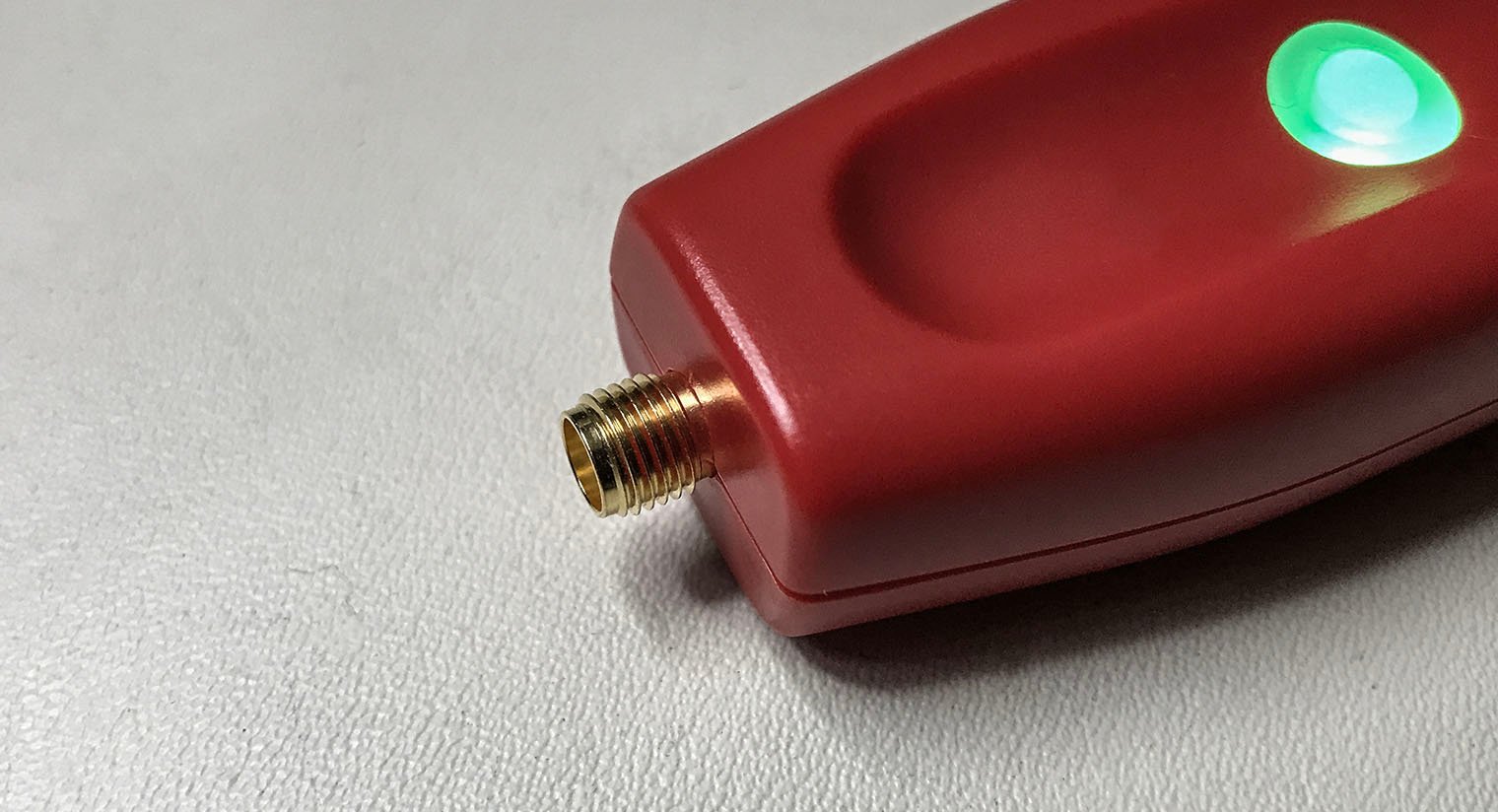 The plastic used doesn’t have the highest quality feel but is acceptable. The run/stop/power button has a satisfying click when pressed. The default probe tip works like any other scope probe you’ve used. The bulk of the Aeroscope might get in the way, but I didn’t find it intrusive when probing my Arduino and Raspberry Pi circuits.

There is also an option of mini-grabbers which is ideal for completely hands-off measurements. Both the “probe tip” and “mini-grabbers” attach to an SMA port. Of course, SMA is a bit overkill for a 20 MHz application, but its size is ideal.

Aeroscope vs. Tethered vs. Standalone

When you’re shopping for a scope in the $200-300 price range, you have two options: Tethered or Standalone. I’m not going to consider used scopes in this comparison, but they can be an option as well.

First, let’s take a snapshot look at the differences.

A tethered oscilloscope requires an external computer and connects by USB, Bluetooth, or WiFi. The computer could be either a PC, Raspberry Pi, Tablet, or Mobile Phone.

These digital oscilloscopes tend to have basic acquisition hardware. Some will even try to stream their acquisition from the A/D to the tethered computer. This method may save cost, but it does come with at least one limitation. Your sample rate is, fundamentally, limited by whatever rate the interface can stream data.

Note: One example of a tethered scope that does not have basic hardware is the VirtualBench from National Instruments. It’s not as barebones as most “USB Scopes.”

Another issue I tend to have with tethered based instruments is a lack of knobs, buttons, and switches. Maybe it is a generational limitation, but I like twisting a knob for the vertical and horizontal controls. Clicking a mouse or tapping a button seems slower to me, especially when I’m using my left hand. (Since my right hand is usually holding the probe.) Mobile-based devices are quickly removing that core issue. Using gestures like pinch and swipe have improved usability significantly.

I’m going to compare the Aeroscope to a Siglent SDS1052DL (standalone) and Digilent Analog Discovery 2 (tethered.) These cost just a little bit more but look at how the three compare.

For $60-80 more, you can get a lot more scope from either the standalone or USB-based option. In fact, the Digilent does much more than just function as an oscilloscope.

Should you press the Run or Stop button on the Aeroscope?

Bottom line, I like it. At $200 this one might be a tough sell though. For just a few more dollars you can get a lot more scope than what the Aeroscope offers. So that means, it boils down to this:

If you don’t want an ultra-portable DSO, I can’t recommend this one.

For me, it is great I can carry around a scope in my laptop bag. In a hotel room, I can see a Pi signal toggle.

[shareable]If having a scope in your pocket matters then you should consider the Aeroscope.[/shareable]
aeroscopedigilentoscilloscope
0

PWM a 3-pin PC fan with an Arduino

Top of the P(acq) – Oscilloscope Talk