Linear regulators only need a small number of components, are simple to add to a board, but are not very efficient. Switching regulators can be made to be very efficient for a particular circuit, but can be difficult to design.

Back on AddOhms #17, we talked about how Linear Regulators work. In this tutorial, we are looking at switching regulators.

There are 4 core components needed in a switching voltage regulator.

Capacitors store energy in an electric field. When a voltage is applied, the capacitor charges up. When the voltage goes away, the capacitor discharges.

Switching voltage regulators work by making use of the energy storage properties of a capacitor and an inductor. To control the charge and discharge of these components, we use diodes and transistors.

As we discussed in AddOhms #8, diodes only allow current to flow in one direction. Later, we’ll see what that is important.

The switch or transistor used to control the regulator is why we call them “switching regulators.”

Now that we have all of the components let’s combine them together.

A buck converter, also called a step-down converter, will create an output voltage lower than its input voltage. This is similar to how linear regulators, like the LM7805, work.

In an ideal circuit, all of these components would have no power loss. In reality, these all burn a little bit of power, which is known as switching losses.

However, compared to a linear voltage regulator, this switching circuit is much more efficient. 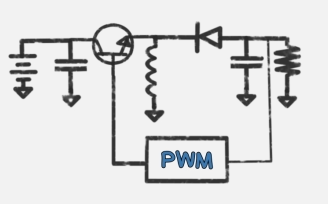 A third type of switching converter, is a ‘Buck-Boost” configuration. This circuit boosts a low input voltage and bucks down a high input voltage. There are several types of buck-boost converters. The one drawn here is an inverting buck-boost. Two other popular types are the Single-ended primary-inductor converter SEPIC and Ćuk converters.

These are commonly used on battery circuits to extract the maximum energy possible from a battery.

Normally, an integrated circuit, or IC, is used for a switching regulator. It contains the switch and the PWM controller. An example is the LM3671 Buck Converter from Texas Instruments.

The simplified schematic shows input capacitors, output capacitors, and an inductor. Even though this looks simple, a switching regulator is much harder to design than a linear regulator.

Designing the PCB takes much care. In this case, TI provides a very useful layout recommendation in their data sheet, plus lots of information on how to pick components.

What if you do not want to go through that much effort? Well, you can buy pre-made switching modules that are simple as Input and Output pins.

The high efficiency of switching regulators makes them ideal for high current applications or projects that run on battery. What has been your experience with using or designing your own switching power supplies? 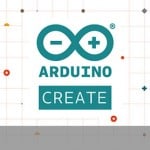