Maker Faire, like any festival, is a combination of passion products, startups, and larger companies generating awareness. As I walked around, I noticed many logos and brands. An obvious one to see is Make Magazine. Another I saw that made sense is Digi-Key’s maker.io. They had a strong showing, along with the Arduino booth. But that one is expected since so many projects, not just electronics, have an Arduino in them. That said, there were five brands that I did not expect to see at Maker Faire (and most had something interesting to show.)

(Please note, no mentions came from paid placements. I am genuinely interested in their presence at the show.)

Check out my other Maker Faire 2018 posts and announcements

Depending on your profession or hobbies, you might know different sides of the Robert Bosch company. Many people know them for their power tools or appliances. Others recognize the sensors and automotive components. They also manufacture many safety systems for cars. I didn’t know this until recently, but they even made mobile phones at one point. As a conglomerate, they are in many fields.

At Maker Faire, they did not have a booth. However, there were two companies they owned on display. The first one I encountered was Mayfield Robots.

Kuri is a home robot that drives around taking pictures of your home. People can interact with it, and it tries to be “cute.” Technology wise it has a compelling sensor package that uses a form of LIDAR to map out a room. To me, that sounded familiar and is when I learned Bosch owns Kuri’s maker, Mayfield Robots.

I won’t talk about this anywhere else, but I am tired of these “home robots.” There were at least 6 at this show and dozens at the last CES. They all claim to do the same things. They all claim to become part of the family, read your emotions, and a bunch of other stuff that doesn’t matter. End rant.

In fairness, Dremel is probably well known to the maker community. However, there was a fact I did not know which is why it made my unexpected list.

During Dremel’s Digilab presentation, I noticed the Bosch logo on a slide, which made me wonder if they were also using Bosch sensor technology. It turns out, Bosch has owned Dremel for something like 20 years! I had no idea.

No maker’s toolbox is complete without the infamous rotary tool. The wide variety of tips and usability make it indispensable in any workshop.

Several years ago Dremel entered the 3d printer market. To be frank, I thought after one model they would move on to other things. I was wrong. At Maker Faire this year, Dremel introduced a new laser cutter, Dremel LC40. Not really an imaginative name. I am pretty sure it stands for “Laser Cutter, 40 Watt.”

I took some time to talk to a couple of people to get an idea about their new tool. Many of the features sound familiar to other attempts at making a desktop laser cutter.

There is one feature missing from that list that kept getting repeated: UL-listing.

The LC40 is the first UL-listed laser cutter. Before that statement endows the device with magic powers, realize what UL-listing means. There are specific tests that devices must pass to achieve “UL Listing.” Which means, they are unlikely to cause death or fire in the event of a failure. However, this does NOT mean they are infallible, or accidents will not happen.

I learned about three tests when I asked, “what does UL-tested mean?” Of those three, two sounded familiar to me in regards to other equipment.

High voltage testing is universal, especially on anything with a metal case. After applying lethal voltages to the device under test, it must fail gracefully. No failure mode can expose those voltages to its exterior. In other words, high voltages should not make it to you, even after it is damaged. Also, it cannot explode. 🙂

The self-extinguishing test sounds similar to UL94 which requires plastic, well, to self-extinguish when exposed to a flame. Regarding the LC40, the rep told me that if a fire occurs inside the work bed, it self-extinguishes in less than 90 seconds. (After turning off the air assist, of course.)

The water dump test was the least explained to me. It sounds like the unit must fail gracefully after dumping some water on it.

A couple of disclaimers. I have not had time to verify any of these claims or information. I am presenting the information said to me, on the floor of a jam-packed show and so this information may be incorrect. Please verify any claimed related to UL status or testing before purchasing.

Oh, it is Cloudless!

Many low-cost or entry level digital fabrication tools rely on cloud-based services. The LC40 is an exception. All of the control software runs offline from the unit itself. You do, however, need to have WiFi or ethernet to connect to the device. I asked if the connection was ad-hoc or infratrcture (aka connects to your hotspot). The rep told me that it is infrastrcuture mode with ad-hoc on the feature wishlist. There is no support for USB.

Learn more about the Dremel LC40.

I guess that most of my readers do not recognize the name “Samtec.” The electronics industry knows them as an interconnect company. That is our fancy engineering word for connectors. My experience with them was mostly around high-speed cables and connectors. They offer standard copper, RF, and optical products.

Having that history with them, seeing Samtec at Maker Faire was a total surprise to me. Often the connectors we use in the hobby world, like header pins and ribbon cables, are inexpensive and nonproprietary. But check this out. Not only does Samtec support this kind of work, but they were also giving away Expansion Connector Accessory Kits for Arduino, Raspberry Pi, and Beagle Bone.

The kits for each board include slightly different hardware. The Raspberry Pi kit has some cool surface mount socket headers for the GPIO. The sockets are low-profile, which is great, because I was looking for something like these already. The Arduino kit contains different size of header pins suitable for the GPIO.. The Beagle Bone Black contains standard through hole adapters. To me, any company that recognizes the value of supporting the Beagle Bone indeed recognizes makers!

One the product pages, you get 3D previews of the connectors. You can also download 2D and 3D formats for each in a wide variety of formats. Next time you need to connect something to your something, check out what Samtec has to offer.

Lexus had a small booth area showing off their new UX cross-over SUV. From a maker perspective, I was annoyed when the representative talked about its “technology package.” Really. Having an in-dash computer capable of streaming Spotify does not count as innovation anymore. Everything I own streams Spotify.

This booth was the most “salesy” I saw at the show. It did not fit with the Maker Faire theme. That said, it is a nice looking SUV or car or whatever Lexus calls it. I did not go to the show for cars.

Lexus was not the only Japanese brand to catch my attention.

What comes to mind when you think of Sony? For some, it is the PlayStation. For others, it is the Walkman or the Trinitron TV. Photographers might know their fantastic line of micro four-thirds cameras.

At Maker Faire, Sony previewed the Spresense. I keep wanting to call it the caprese, like the salad. I guess that the name is a combination of “Sony” and “presence.” Or “Sony” and “pre-sense?” Anyway. Unlike the salad, these boards include Sony’s DSP technology.

At the core is a processing board based on an ARM Cortex M4F with 6 cores. Yes, 6. The standard buses are there like SPI, I2C, and UART. There is also support for 8-channel digital and 4-channel digital audio. Built-in positioning supports GPS and GLONASS.

So how do you program all of this amazing hardware? Development support includes Scratch, Arduino, Eclipse, and Visual Studio. Right out of the gate, Sony is hitting education, rapid prototyping, makers, and embedded developers with their platforms.

I forgot to ask pricing, but the board is expected to ship in July. One of the representatives told me that standard electronics distributors would be stocking them.

Walking around Maker Faire, I always see cool projects and interesting products to add to my wishlist. I’m also interested to see what larger corporations are doing to support makers as well as open source hardware. These were the four (or five) that caught my eye this year. 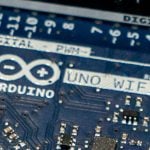 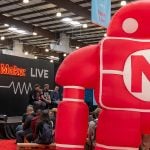