Joseph Heremans and Roberto Meyrs at the Ohio State University have been studying materials that could be used to turn heat from ICs into electricity. The research is focused on thermo-electricity and spintronics. In theory, this could mean mutual benefits to heavy processing: more effective heat removal from processors while generating the electricity they need to operate.

“All of the computers we have now could actually run much faster than they do, but they’re not allowed to – because if they did, they would fail after a short time,” Myers said in the statement. “So a huge amount of money in the semiconductor industry is put toward thermal management.”

Full details are available from an article in Nature Materials. Suzanne Deffree at EDN has provided an excellent (and more detailed) write-up titled: “ICs could run on heat waste, rather than electricity, researchers believe.” 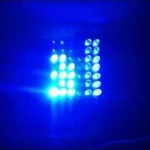