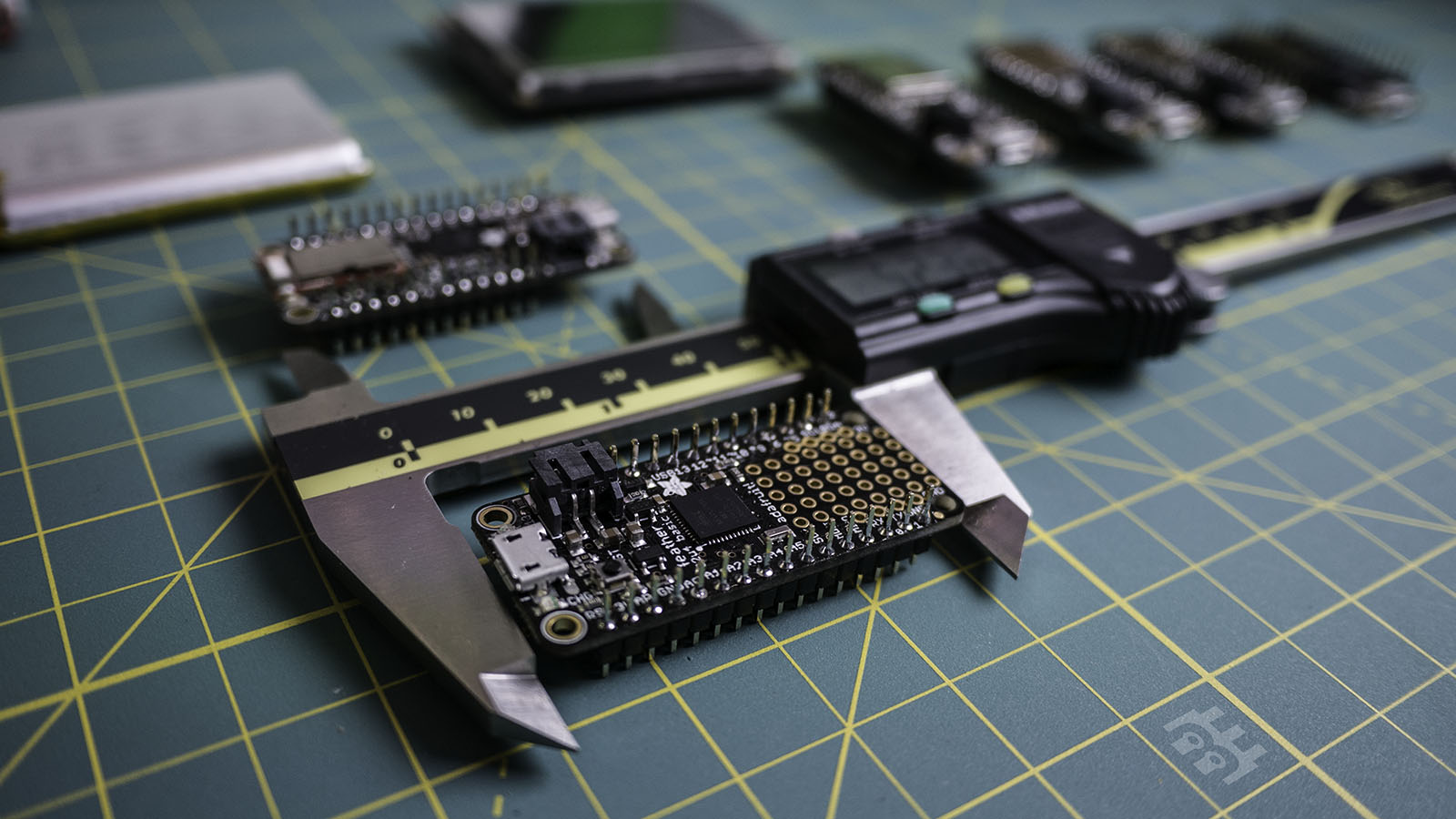 Four days ago, I found out I needed to make a piece of a costume. The idea was to combine a TFT LCD with a microcontroller and Bluetooth Low Energy. I checked my microcontroller bin and found some Adafruit Feather Boards. In this post, I will introduce the feather family and provide a decision chart for choosing the right one for your project.

The Feather board have a standard footprint and pinout. Most(All?) have a USB connector, a microcontroller, two rows of pins, and a battery charger. They measure 50.80 by 22.86 mm, which is 2.0 by 0.9 inches.

For me, the built-in Lithium Polymer (LiPo) battery charger was the critical feature that got me interested. When it comes to LiPo batteries, I do not like to mess around. So having a proper charger circuit is essential. Looking at the Adafruit schematic, they are using a Microchip MCP73831 LiPo charge controller. The diode connection between VBUS and VBAT is a clever trick. 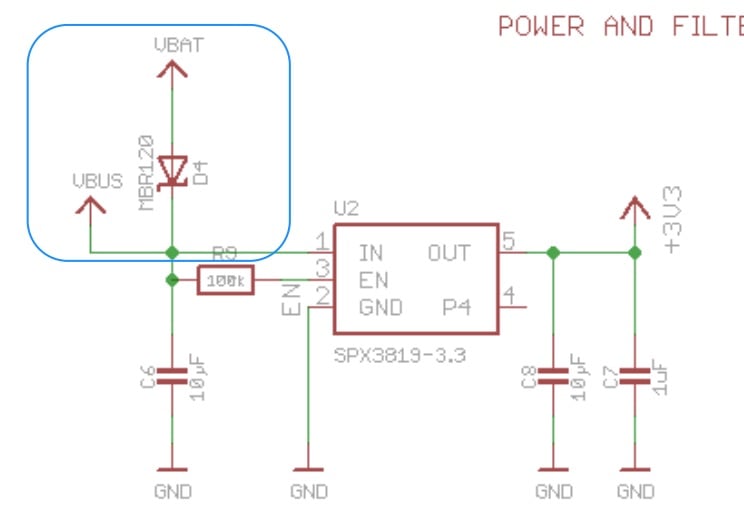 When both USB and a Battery is connected, the diode allows auto-switching between bus and battery power. This design prevents the load from being powered by the battery, while it charges. I think it is an intelligent design. By default, these chargers are limited to a 100 mA charge rate. Which, by my rough calculations, means it will take at least 4 hours to charge a 500mAH battery pack.

In my project, I almost soldered the battery directly into the circuit. This move would have bypassed the JST style connectors. I held back because at one point I was going use a 2500 mAh battery. At 100 mA, it’d take quite some time to charge the pack entirely. So I kept the JST connector so I could use a similar circuit, but designed for charging at 500 mA.

The other problem with this approach is that there is no way to turn off the microcontroller. It is probably possible to design with sleep modes to minimize current draw, but it does mean any time the battery is connected, it is in use. 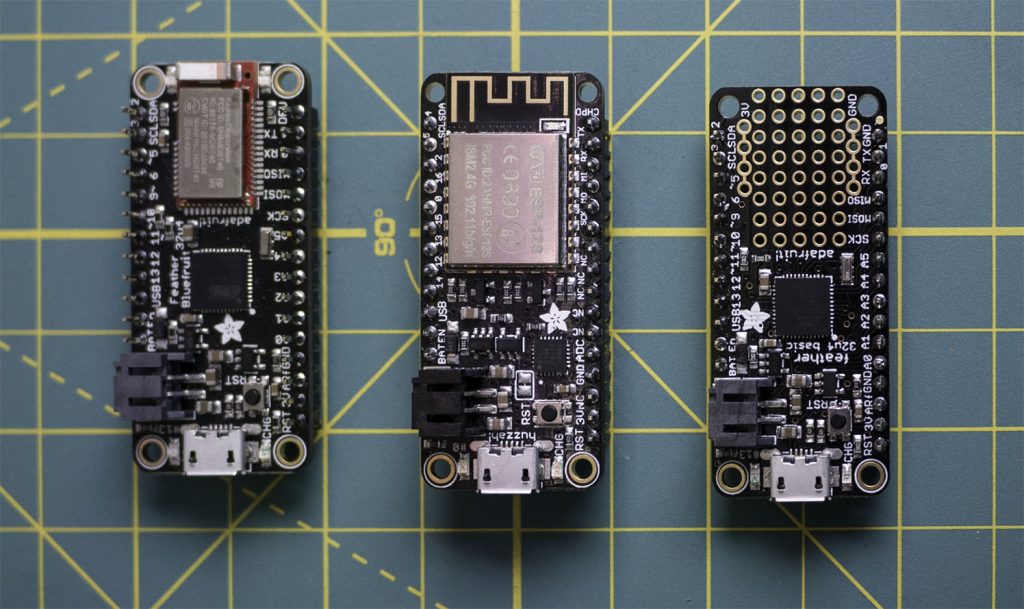 The 32u4 is the same processor found in the Arduino Leonardo. It is similar to the 328p regarding specifications. Regarding capability, it has a key difference, a built-in USB interface. In most of my custom Arduino projects, I replace my prototype 328p design with a 32u4. The built-in USB reduces parts count on the board. Plus, you get a free UART, or serial, port for design use.

The Atmel (Microchip) SAMD21E ARM Cortex-M0+ processor is the brain of the M0 Feather. (The Arduino Zero uses the same processor.) Let me tell you if you’re ready for 32-bit operations these are amazing chips. They run up to 48 MHz, have 32K of RAM and 256K of Flash. Plus, there are six serial communication (SERCOM) ports. However, those highly flexible ports support I2C, SPI, or UART. You pick the port’s function!

The Huzzah ESP8266 Feathers have ESP12 modules. Not that it matters, but this was my first introduction to the Feather. It’s the same processor that’s on the Huzzah breakout board. And I’ve read that they have an ESP32 version as well.

If you are making a portable or battery powered project, the feather is a no-brainer. However, which one should, you chose? So based on the boards I worked through this weekend, I came up with this guide.

For this selection chart, I used “dot.” I mentioned that tool in the post on the soft power controller state machine. Expand the code below to see how I generated it. Not very complicated, but easier to look at in graphic form.

If you need WiFi, the ESP8266 Huzzah Feather board is an excellent choice. There is an M0 based board with a separate WiFi Radio. I do not know much about that radio, so I can’t comment on it. I left it off my chart until I know more about it.

Bluetooth Low Energy (BLE) is an ideal wireless protocol for interfacing with mobile devices. On iOS, there are no special licensing requirements to communicate with BLE devices. On Android, you’ll just need to make sure your Android device supports BLE. Windows/Linux/Mac support depends on the Bluetooth chipset’s age. In my case, I was using both the 32u4 and M0. What was surprising is how easy it was to change the software. The pins are the same on the 32u4 BLE and M0 BLE modules. So to upgrade from the 32u4 to the M0 was as easy as

If you’re just looking to power an Uno or Leonardo project by battery, consider the 32u4 Proto. Keep in mind that these boards are clocked at 8 MHz and designed for 3.3-volt I/O logic. You might think that since the Feather and Nano are so close in size, why worry about a Nano replacement? Well, one reason is power. The 32u4 by itself draws less current than a 328p and USB-to-Serial chip. Also, the Nano form factor lacks a battery charger.

If you’re looking for a small board but don’t care about battery, or you need faster processing than these boards offer, then you can consider two other form factors. The Nano, mentioned above, is very popular as a direct Uno replacement. And there are PRJC’s Teensy boards. The Teensy 3.x are ARM-based solutions that come in ultra small form factors. They are not the same processor used by the Adafruit feathers. However, the Arduino builder process supports them well. This support means moving code over to them is painless.

In addition to the microcontroller boards, there plenty of accessory options, designed to attach directly.I made use of the 2.0 TFT Featherwing. It has built-in touch, but I did not make use of the touchscreen. 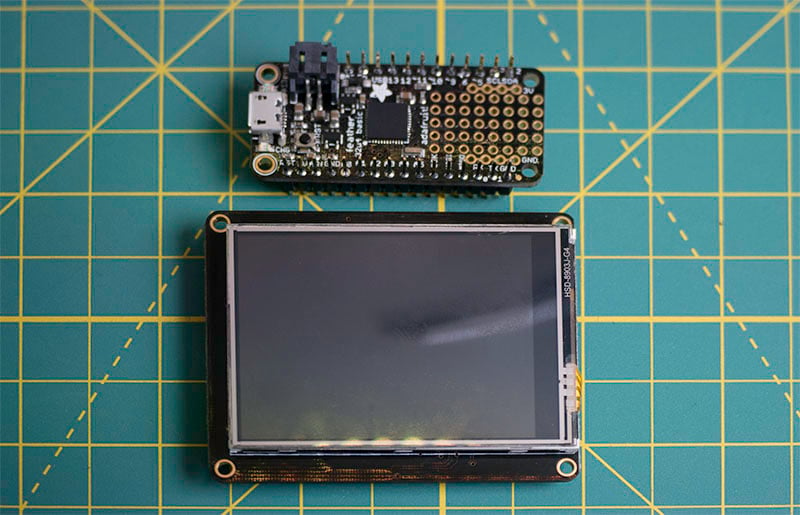 You can also solder a jumper to connect up a PWM signal to the backlight. Furthermore, the SPI control pins can be moved around by cutting small traces with a sharp knife and some soldering.

Adafruit’s technical documentation has the PCB design for the TFT Featherwing. However, the LCD side of the board is missing dimensional data. So I have created this TFT Featherwing SVG. It isnot exact, but it was close enough for me to cut a hole and make a simple spacer. Since SVGs seem to resize based on the program reading them, I included a 10mm line in the middle for scaling purposes.

Other accessories include various LED panels, NeoPixels, sensors, and even relays. There are, of course, blank prototyping “shields” or “feathers” that can be attached as well. With all of these accessories, you purchase them much cheaper without the feather boards connected. However, if space or time is at a premium, they make for a compact solution.

For now, I am keeping the costume piece under wraps. You can follow me on Hackster.io if you want to see it. I will release the project after the party. For now, I need to get back to modifying the BLE code.

Learn more about Adafruit Feather Boards
What Arduino-like boards have you used in projects? I’d especially like to hear about wearables!
32u4AdafruitESP8266featherM0surreal
0 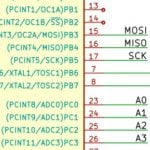 DIY Arduino Schematic board and Checklist