I had the chance to spend some time with the Arduino team before and during Maker Faire Bay Area 2019. I also attended Massimo’s “State of Arduino” talk. In short, there are new Arduino Nano boards coming, a certification available today, updates on the Vidor, interesting education kits, and one more special announcement.

It rained most of the weekend, which I am sure caused attendance to take a hit. Normally this would not be a big deal, but there was some talk it may be the last year for the Bay Area’s show. As usual, I walked the show on Friday and did take note there were several new exhibitors throughout. For that reason, I hope it is not the last one.

Depsite the grim news, spirits from attendees were high. On Saturday I helped answer questions and give out t-shirts at the Arduino booth. The time flew by fast but not before I got to overhear and explain tidbits about this year’s Arduino announcements.

My favorite announcement, hands down, is the new Arduino Nano boards. The boards are a new small form factor featuring castellated edges. A “castellated edge” means you can solder the entire module to a PCB. It is a cost-effective way for adding a complex microcontroller solution to small and medium run products. You might be familiar with the concept from the ESP, WiFi, or Bluetooth modules.

The board form factor is really the only thing these new Arduino Nano boards have in common. Each offers a slightly different feature set. Oh, and the price for each is shocking for an Arduino branded board.

The Nano Every incorporates the same 8-bit AVR chip found in the Arduino Uno WiFi Rev 2, announced in 2018. The main CPU is an ATMega4809 which is 5 volt compatible. Unlike the existing Nano, it runs at 20 MHz, has 48 KB of Flash and 6 KB of RAM. (What am I going to do with three times the RAM?!) For the GPIO pins, there are still 5 PWMs, 6 analog inputs, and a digital-to-analog converter (DAC) out.

Interestingly the USB-to-Serial communication is handled by a SAMD21 which an ARM Cortex-M0+. But even better is that the Arduino Nano Every starts at $10! TEN DOLLARS. (Headers add $2.) Clearly, the Arduino team is taking aim at the low-cost clone market.

Pre-order with expected delivery in mid-June 2019.

A step up from the Nano Every is the new Arduino Nano 33 IOT. I did not ask anyone, but I think the “33” of the other new Nano boards is because they are 3.3 volt based systems. Which also means they are NOT 5V tolerant! The primary CPU on this board is a SAMD21 M0+, like the one found on the Arduino Zero and many other 32-bit Arduino boards. Like last year’s Uno WiFi Rev 2, it includes an ATECC608A crypto chip and NINA W102 ESP32 based module. Which means the Nano 33 IOT includes both WiFi and Bluetooth.The 33 IOT also offers a 6-axis IMU. ST Micro makes the IMU which combines an accelerometer and gyroscope.

Pre-order with expected delivery in mid-June 2019.

Up your budget by $1 and you can move to the new Arduino Nano 33 BLE (Bluetooth Low Energy.) Visually it looks similar to the 33 IOT. But there are three significant differences between the two. First, the central processor is a Cortex M4F. This board (and the BLE SENSE) are the first M4-based boards from the Arduino team. The second is that a NINA B306 replaces the NINA W102. The NINA B306 provides a Bluetooth 5.0 radio (and no WiFi from what I understand.) And finally, the onboard IMU provides 9-axis of movement instead of six.

Again, it is only $19 for this board, without headers.

Fewer details are available on this one with delivery expected in mid July 2019.

As the Arduino engineer walked me through the boards, I thought to myself, “there can’t be anything else you shoved into a board that small.” And I was wrong. Take the Nano 33 BLE (M4, IMU, BLE) and add a microphone, humidity, pressure, light, color, and gesture sensor. All of those capabilities packed into this small package may make it the ultimate wearable microcontroller board.

With headers, this board runs 32 bucks. Keep in mind the Uno WiFi Rev 2 is still listed in the store for $44. Given the technology built into the board and the quality of these units, I am still shocked by the prices.

Fewer details are available on this one with delivery expected in mid-July 2019.

While waiting to receive one of the new Arduino Nano boards, you might think about becoming Arduino Certified. (Because that’s a thing now.)

Certifications are like standards; there are so many of them you can pick and choose. However, unlike standards, there do exist official certifications. Joining the ranks like Cisco, Microsoft, and Salesforce, Arduino now offers a fundamentals certification. To obtain the certificate, you must answer 30 questions which span basic electronics, programming, and Arduino specifics. Currently, it is only available to participants in the US and costs $30 per attempt. If you pass, you receive a digital certificate with a unique identifier. Here’s an example of one. 🙂

I had issues with a couple of the questions as asked. However, overall, I think the test process is fair. There are also plans to add an Education and Professional certification, but I don’t have details on those. I suppose like all certs, time in the market determines the value for the cert. If you are hunting for an electronics job, $30 to include “Arduino Certified” on your resume might be worth it to you.

Since some of my readers are educators, I do want to mention the recently introduced education kits. The two kits displayed at the show are designed for use in classrooms. They go well beyond a starter kit, which might only focus on electronics basics or “learning Arduino.”

The first kit is the “Science Kit Physics Lab.” Arduino developed it in partnership with Google. Two students can experiment with electromagnetism, thermodynamics, and kinetics. At Maker Faire, there was a demo where you could swing a PCB and see the accelerometer graph the results in a Google notebook. The kit is only about $200, which seems like a reasonable price for a package of this quality.

The other kit was a 10-student CTC (Creative Technologies in the Classroom) package. It contains 26 projects that cover robotics, power, motors, wireless communications, and sensors.

As I mentioned, the new Arduino Nano was my favorite announcement. At the 2018 Maker Faire, my favorite Arduino announcement was the Vidor 4000. When announced, they said a GUI to program it was coming soon. Here we are a year later, yet no GUI introduction! Massimo joked during his talk that they threw away the first one and several follow on attempts. Now they are finally making progress on an easy to use interface for the Vidor. From the discussions I had, it sounds like more than just a GUI is coming.

The Arduino team drastically underestimated the demand for users to program the Cyclone FPGA directly. Before the Vidor’s launch in 2018, all of the effort was around providing pre-configured bitstreams. There has started a shift to allow direct programming of the FPGA. The first visible step forward supporting a bitstream load with the recently introduced Arduino CLI.

I don’t know if the talk was meant to echo a Steve Jobs moment, or if Massimo just felt he needed to address one more thing. With a new Arduino Nano, the certification, education kits, and long-awaited Vidor updates, what else could be coming?

There is an Arduino IDE 2.0 in the works. Today it is very alpha. The team plans to move the IDE to Theia. Before mentioning it to me, I had never heard of Theia. It is the same framework used by ARM’s mbed IDE. From what I understand, Theia supports both cloud and desktop development. It is an open source project, and Massimo says the Arduino team plans to contribute to it.

I asked why not adopt something like Atom which is already available. The goal, like most things Arduino, is to provide a complete package. Nothing about this move sounds like it will prevent existing IDE workflows. Instead, it is a replacement for the aging Java-based IDE. I do understand that perspective, because “time to blink” continues to be one of the Arduino platform’s best features. 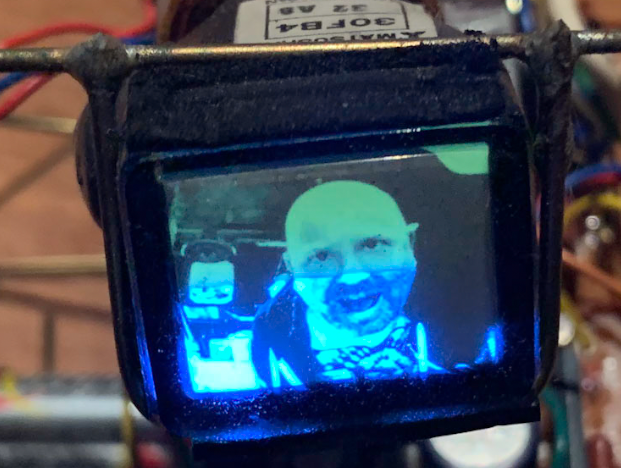 Of course, there were a lot of other cool things at Maker Faire. In my weekly email newsletter, I included 5 other projects and products I found interesting.

When I first heard the only new hardware was a few Nano boards, I thought it was going to be a slow year for the Arduino team. However, as you can see from this post, there were plenty of exciting announcements. I’m very much looking forward to the new Arduino nano boards. I plan to do some testing and post on how to mount castellated boards to a PCB. So if you have any tips, send them my way.

In the meantime, what do you think of the Arduino announcements?
arduinoArduino Nano ExtraMaker Fairevidor
0