(“Graphen” by AlexanderAlUS – Own work. Licensed under CC BY-SA 3.0 via Wikimedia Commons)

Every day a new application involving the seemingly miraculous material Graphene is announced. For example, being in the capacitor industry, I am asked often if my employer uses it. Before answering the question, I usually have to explain what Graphene is and the challenges in producing it.

The lack of supply and limited (real) commercial applications leads me to think of it as Unobtanium… at least, for the near future.

tldr; Graphene is a form of carbon.

Graphene is a hexagonal pattern composed entirely of carbon, similar to graphite. When grown it is a two-dimensional structure that is only 1 atom thick. The hexagonal pattern also gives the material incredible strength. However, in electronics the key characteristic is the high conductivity (low resistance). When you compare the conductivity of graphene to copper, there is an order of magnitude (i.e. big) in difference.

As a raw material, Graphene will be integrated into components, like batteries, transistors, and capacitors. Here’s a quick look at the potential benefits in these components.

Carbon is used in Supercapacitors (ELDCs) as the electrode surfaces and in Tantalum capacitors as an interconnect layer of the cathode. Using Graphene as an alternative to carbon could mean lower ESR for these devices, meaning more power delivered when discharging.

Keep in mind that carbon is pretty easy to come by. For Supercapacitors, the carbon comes from burned coconut shells.

Using Graphene in a transistor seems ideal. High conductivity. Organic. Should be simple. Well, the problem with Graphene is that there is no band gap. So it is very difficult to turn it off, which is a need for an electronic switch.

Instead researchers have looked at Graphene’s thermal conductivity as a way to create a graphene layer to act as a GaN heat sink. GaN, or Gallium Nitride, is a transistor technology that started out being used for LEDs.

Being used as an alternative material in components the obvious. The surprise has been all the crazy applications that the media touts for Graphene. The part that bugs me is that these are almost always just research projects.

I’ve kept a list for some time for all the different Graphene applications I’ve seen. Take a look at a these.

Step back for a minute and realize the broad uses that each of these applications represent. Oh I forgot to mention that graphene has also been looked at for use in Dental Implants.

So if this is such a wonderful material, why isn’t it being used in even more widespread applications. In fact, why are these applications just “research projects” and not real products yet?

Because nobody knows how to cost effectively manufacture large quantities of unobtainium–graphene.

The unique structure of Graphene makes it difficult to manufacture. It’s a 2-dimensional structure, but tends to want to grow into a 3D structure. There are techniques to force the structure to stay 2D, but haven’t been refined yet.

One of the first methods of production was to use an adhesive tape to remove layers after production, leaving behind only the 2 dimension structures. There are a number of chemical processes that aid in the growth crystals, but can’t directly force it.

The most popular method seems to be nanotube slicing. This is where carbon nanotubes are grown and then “sliced” back into a two-dimensional structure.

It isn’t true to say it isn’t manufacturable, but none of these methods produce large quantities of Graphene.

Just to help illustrate the Unobtainium aspect, here are two other methods that have been proposed for production, from researchers.

At UCLA researchers (there’s that word again), put together some experiments to create Graphene from a form of graphite. They used a LightScribe enabled drive.

Chemistry World has a longer writeup on this procedure. This method was proposed over two years ago, but still hasn’t moved to volume production.

Going about to the 2D versus 3D growing issue, one option is to pattern the growth using DNA. This method keeps the structure 2D, but introduces some impurities that reduce the electrical conductivity of the material.

This is just another example where researchers are at work, but the media touts it as a commercial movement.

Material science is one of the last engineering disciplines that encompass true innovation. Learning how to create a new material or change an existing one to support a new application is incredibly difficult. Graphene is a fantastic example. We know how to make small quantities of the material. Plus we know what we want to do with it. But. We don’t know how to make a lot of it yet. Until we do, how can we put it in everything from dental work to speakers to the capacitors that power everything?

Where have you heard of Graphene being used or do you have ideas for its use?
Graphene
0 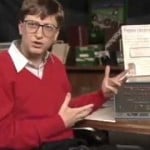 Bill Gates talks about the Altair 8800