Understand the difference between DC and AC

The fifth episode of AddOhms tackled the difference between AC and DC.  One of the things I wanted to stress in this tutorial is that even though the acronyms stand for “current”, they get used to describe voltages as well.  Which, after a video on the difference between voltage and current, seemed like something that needed to be stated.

No behind the scenes for this one, just the finished video. 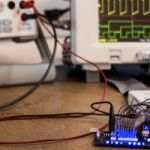 Learn how to use a Mixed Signal Oscilloscope

Arduino pinMode(): When to use and why