While I was attending a material science conference, I learned the value of listening to something new. The paper I came to see was finished, and the next was about to start. It was titled, “Additive Manufacturing.”

What a dull phrase, right? Well, I was stuck in the middle of a row with four people on either side of me. So I decided, it was a good time to catch up on Reddit. What I didn’t realize is “additive manufacturing” is what almost everyone else in the world calls “3D Printing.” Plus, this presenter was talking about doing it with metal!

When you think about it, most extrusion-based 3D printers are laying down material one layer at a time. In other words, they are manufacturing an object by “adding” material. See the connection? Most people probably lump 3D-printing into rapid prototyping and additive manufacturing into a “real” production process.

At SXSW one year, I attended an event held by Shapeways. Objects they made were all over the venue, and they looked incredible. Plus, some were for sale. My favorite? Super Mario Bros related stuff. Do a search for “Mario” in Shapeways marketplace for some neat things to add to your desk. 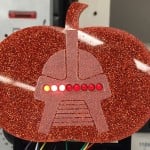