While I bought my 3D printer a couple of years ago, in March of this year, it only had 75 hours of use. Since March, my counter is over 300 hours. Why? After spending some time doing the right tweaks my printer is printing crazy good. Here are some of my 3D printer tips.

Maybe you’re in the market for a printer, use one at school, get access to one through a maker space, or (like me) used to use yours for a desk ornament, these 3D printer tips are likely to help.

END_OF_DOCUMENT_TOKEN_TO_BE_REPLACED

Make joins Joshua Smith at Makergeeks.com to find out how 3D Printing Filament is made. They make their own filament from scratch and not just source it ready-made from China.

More information and pictures are available at http://wp.me/p22K2I-1Xt2.

Recently TechShop opened up one of their shops in Round Rock which is just a few minutes from Austin, where I live.  TechShop is an awesome membership based workshop with a huge variety of tools useful for making things.  On this holiday Friday I decided to spend some time with the MakerBot Replicator.

For some time I have been looking at a mini-tripod for my camera/iPhone so I could get pictures of projects while working on them.  While browsing Thingiverse, I came across design files for such a thing.

Since this was my first time using ReplicatorG and the first time I made a 3D print, I decided not to make any modifications.  As it turned out I used the latest version of ReplicatorG (0040) which appears to have a bug.  When I extruded using the Replicator’s left extruder  the MakerBot started off the platform (as if it was using the coordinates for the right extruder).  After down-reving to 0037, things worked fine.

It also appears my Patroit-branded 2GB memory card is not compatible with the MakerBot’s reader.  Bummer.

During the safety and basic use class we spent quite a bit of time on how to level the build platform.  It seemed like a simple enough procedure, so I didn’t fully understand why we spent so much time on it.  The first two pieces of the tripod I printed had a bit of a mess on the first layers above the raft.  After going through the leveling procedure a 2nd time, parts came out much (much) cleaner. 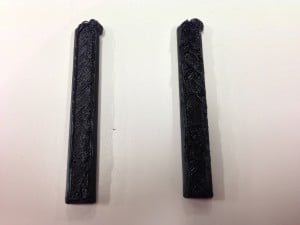 This particular design took 6 prints of 5 pieces to be completed.  The total print time was around an hour to an hour and a half.  In order to attach to a camera a screw is necessary.  On the Thingivere project page, at least one individual has tried printing their own screw.  My TechShop is partnered with a Lowe’s, so i went for the pre-made screws. 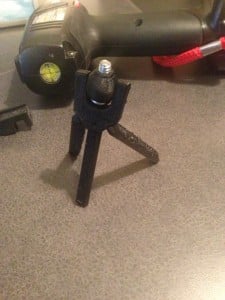 Overall the tripod doesn’t really withstand much weight.  However, I think it will work for the couple of times went I want to use my camera to shoot some video or get a clear macro shot of a project. 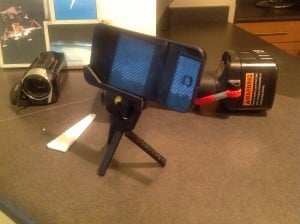 This week marks the start of the 2015 Holiday Shopping Season. Being a short week for me, I thought I’d offer up some gift suggestions for engineers.

END_OF_DOCUMENT_TOKEN_TO_BE_REPLACED 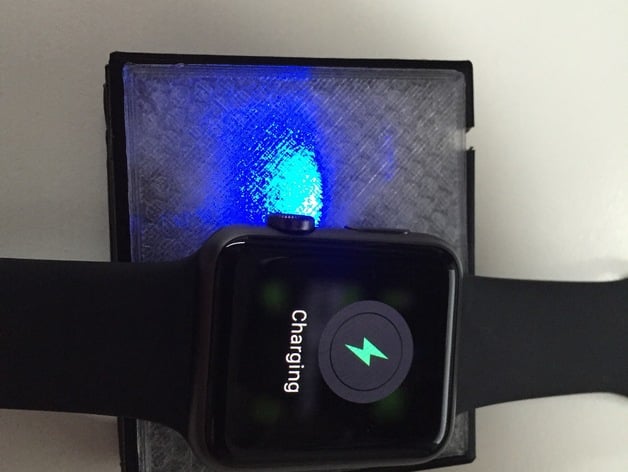 Using an Adafruit Charger Board,  a cut-up magnetic Apple Watch Charger cable and some 3d printing, guypl has created a DIY battery-powered charger for the Apple Watch.

The cool thing about the design is that the 2000mAh battery he used, can be recharged with a standard micro USB cable. As someone who travels often, this setup is ideal for me. One less cable to carry and a self-contained charger for the Apple Watch.

Check out the full project on Thingiverse.

When it comes to a hardware project demo, I see some challenges. Check out these five things to watch out for and, if you’re interested, you can watch my soldering Periscope demo. END_OF_DOCUMENT_TOKEN_TO_BE_REPLACED

This is my first year attending CES. Apparently, nobody told anyone here about the death of the trade show. As an enginerd, here is my perspective.  First, if you’ve never been, this show is huge. Huge. You aren’t just walking around 100 or so booths. This thing is spread across 3 different conference centers in downtown Las Vegas.

With over 160,000 attendees, CES was spread across three massive convention halls. Nearly every company offering electronic products were on display. From Televisions to Appliances to Computers to Automotive Electronics to Wearables.  Broken down below are highlights and pictures from the show, based on industry or application area.  END_OF_DOCUMENT_TOKEN_TO_BE_REPLACED

This week I am moving! So I asked Andrew from Crash-Bang Prototyping to fill in. While not a tutorial, he has a very unique perspective on engineering, being that he lives in Africa. After reading his outstanding post, make sure you take a look at the excellent AVR/Microcontroller tutorials on his blog.

James and I were talking over e-mail the other day, and he said that he felt isolated living in South Florida. Isolated? You should try living in South Africa, James – Then you’ll know what isolation is!

Not only do we spell “neighbour” incorrectly and watch sports matches that take five days to complete, but we also don’t have overnight shipping from the Digikey or Mouser, or Maker Faire NY, or Solid Con or… a whole lot of other things. So just how lucky are makers who live in the States or Europe or China, and what’s it like living 10,000 miles from Silicon Valley? END_OF_DOCUMENT_TOKEN_TO_BE_REPLACED

The most famous example of additional hardware is the “SuperFX” chip that debuted with the SNES game Starfox. (It was in used in others in addition to a successor.) Most NES cartridges had other hardware too: mappers, sound generators, additional ram, etc. END_OF_DOCUMENT_TOKEN_TO_BE_REPLACED

Cytec
2018-JULY-18 UPDATE: It appears Peter has shut down his rendering tool. It is no longer available. 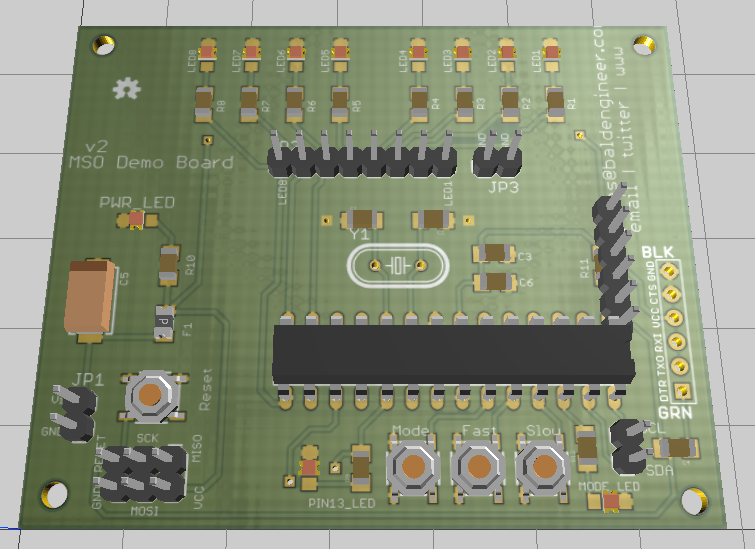 3D Render of MSO Demo Board

Earlier I posted a PCB Checklist of items to double-check when sending your board out to a fab. The Dangerous Prototypes blog pointed to a 3D EAGLE PCB tool from a Bulgarian-based developer called Cytec that takes an EAGLE BRD file and renders it in 3D for you.

The example board I have above is a render of my MSO Demo Board. And I have to be honest, it looks much like that one! END_OF_DOCUMENT_TOKEN_TO_BE_REPLACED

While practicing the Quadrotor‘s motor mounts on a Shopbot gave me experience in how to register two sides for milling, I didn’t want to invest the time required for the arm mounts.  So I decided to make use of the MakerBot Replicator 2 to print physical samples in PLA.  Time per piece went from about an hour to about 15 minutes.

END_OF_DOCUMENT_TOKEN_TO_BE_REPLACED

This Quadrotor project is a collaborative effort between Mike Kurdziel and I. The unique twist on this collaboration is that he is located in Menlo Park, CA and I am in Austin, TX. We’re collaborating remotely while doing most of work on the TechShop locations in each of our towns. END_OF_DOCUMENT_TOKEN_TO_BE_REPLACED

A couple of years ago I started looking at what it would take to make a quadcopter.  At the time, I only had the limited tools at the Austin hackerspace available to me (which I don’t think even has a space anymore).  So I shelved the idea since I didn’t see a time effective way to make any of the components.  Fast forward to a few months ago when I joined the TechShop in Austin.  Now I have no excuses to not make a custom Quadrotor.

END_OF_DOCUMENT_TOKEN_TO_BE_REPLACED

When I started working on Open Vapors, I thought the stumbling point would be the PID algorithm or safe AC line control. However, it turned out; I spent a significant amount of time understanding how to print to the Arduino LCD display correctly. 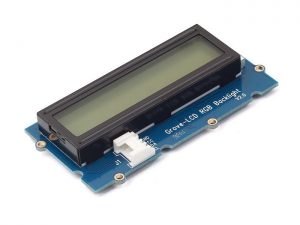 If you need an easy to use RGB LCD, check out the Grove LCD from SeeedStudio. They sent me one to check out. The LCD comes with Seeed’s “grove connector system” which can connect to a variety of their Arduino-compatible boards. You can also pick up the Grove Base Shield which adds a variety of Grove connectors to an Arduino Uno. The Grove LCD makes it super easy to connect up a character LCD. It is very plug-and-play.

As I dig into my latest project, the lessons I learned back then are coming back to me. Here are 7 tips for driving an Arduino LCD display, like one with 2×20 or 4×20 characters.

END_OF_DOCUMENT_TOKEN_TO_BE_REPLACED

From the company that brought us, “There is a worldwide need for no more than 5 computers”. IBM is announcing 5 Innovative Technologies we will see over the next 5 years.

In summary they are:

Ever notice when you over-stress plastic, the stress points tend to turn white? The color or type of plastic doesn’t seem to matter, does it? So what is going on? This awesome post from EngineerDog explains why stressed plastic turns white.

If you’re starting to work with ABS on your 3d printer, it will help to understand what is happening to the polymer chains. It’s a process called crazing.

One good reason to learn about crazing is there is a way to fix it. So check out EngineerDogs’ explanation for more.

The Open Vapors project has taken some big steps forward recently.  The controller’s enclosure is now a custom box, has a front panel, and the LCD’s menu system is almost done.

END_OF_DOCUMENT_TOKEN_TO_BE_REPLACED

A gCode viewer is essential when doing anything with a CNC. Knowing where the tools is going to run can mean the different between a failed cut and a broken bit. Or let’s say you’re trying to debug some gCode scripting, no need to wait an hour to find out you messed something up. That’s where a GCode Viewer can help.

There are several on-line options that let you upload files and see them in a 3D view. However, if your CNC is setup like mine, there isn’t a good internet connection available. Camotics, formerly the unfortunately named OpenSCAM, is a cross-platform open source gCode viewer / simulator.

Most recently I used it to debug some gCode that pcb2gcode generated from a Kicad board I am working on.