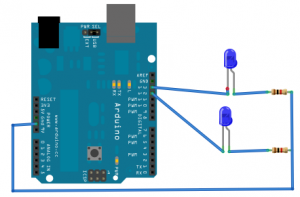 After working through these exercises, check out this article on how to avoid rollover or reset mills().

After learning how to flash a single LED on your Arduino, you are probably looking for a way to make cool patterns, but feel limited by the use of delay(). If you ask in the forums, you get told to look at the “Blink Without Delay” example. This example introduces the idea of replacing delay() with a state machine. If you’re confused how to use it, this tutorial is setup to take you from blinking two LEDs with delay, to using an alternate method, right down to how you can use millis().

The millis() function is one of the most powerful functions of the Arduino library. This function returns the number of milliseconds the current sketch has been running since the last reset. At first, you might be thinking, well that’s not every useful! But consider how you tell time during the day. Effectively, you look at how many minutes have elapsed since midnight. That’s the idea behind millis()!

Instead of “waiting a certain amount of time” like you do with delay(), you can use millis() to ask “how much time has passed”? Let’s start by looking at a couple of ways you can use delay() to flash LEDs.

You are probably already familiar with this first code example The Arduino IDE includes this example as “Blink.”

Reading each line of loop() in sequence the sketch:

The potential issue is that while you are sitting at the delay(), your code can’t be doing anything else. So let’s look at an example where you aren’t “blocking” for that entire 1000 milliseconds.

Example #2: Basic Delay with for() loops

For our 2nd example, we are only going to delay for 1ms, but do so inside of a for() loop.

This new sketch will accomplish the same sequence as Example #1. The difference is that the Arduino is only “delayed” for one millisecond at a time. A clever trick would be to call other functions inside of that for() loop. However, your timing will be off because those instructions will add additional delay.

In this example, we’ve added a second LED on Pin 12 (with a current limiting resistor!). Now let’s see how we could write the code from Example #2 to flash the 2nd LED.

This code is pretty complicated, isn’t it?

If you wanted to add other LEDs or change the sequence, you have to start getting ingenious with all of the if-statements. Just like example #2, the timing of these LEDs is going to be off. The if() statement and digitalWrite() function all take time, adding to the “delay()”.

Now let’s look at how millis() gets around this problem.

Going back to the definition of the millis() function: it counts the number of milliseconds the sketch has been running.

Step back and think about that for a second. In Example #3, we are trying to flash LEDs based on a certain amount of time. Every 500ms we want one of the LEDs to do something different. So what if we write the code to see how much time as passed, instead of, waiting for time to pass?

This code is the same “Blink” example from #1 re-written to make use of millis(). A slightly more complicated design, because you have to include a couple of more variables. One to know how long to wait, and one to know the state of LED on Pin 13 needs to be.

Let’s look at the code from the very beginning.


When using variables associated with millis() or micros(), ALWAYS declare them as an unsigned long
The variable interval is the amount of time we are going to wait. The variable previousMillis is used so we can see how long it has been since something happened.

This code uses a variable for the state of the LED. Instead of directly writing a “HIGH” or “LOW” with digitalWrite(), we will write the value of this variable.

The setup() function is pretty standard, so let’s skip directly to the loop():

Each time loop() repeats, the first thing we do is grab the current value of millis(). Instead of repeated calls to millis(), we will use this time like a timestamp.

Holy cow does that look complicated! It really isn’t, so don’t be afraid to just “copy and paste” this one. First, it is an if()-statement. Second the (unsigned long)  isn’t necessary (but I’m not going to sit around for 49 days to make sure). Third “(currentMillis – previousMillis) >= interval)” is the magic.

What it boils down to, this code will only become TRUE after millis() is at least “interval” larger than the previously stored value of millis, in previousMillis. In other words, nothing in the if()-statement will execute until millis() gets 1000 milliseconds larger than previousMillis.

The reason we use this subtraction is that it will handle the roll-over of millis. You don’t need to do anything else.

Instead of writing a HIGH or LOW directly, we are using a state variable for the LED. You’ll understand why in the next example.

The last thing you do inside of the if-statement is to set previousMillis to the current time stamp. This value allows the if-statement to track when at least interval (or 1000ms) has passed.

Adding a second flashing LED is straightforward with the millis() code. Duplicate the if-statement with a second waitUntil and LEDstate variable.

This code has some small changes from the previous example. There are separate previousMillis and state variables for both pins 12 and 13.

To get an idea of what’s going on with this code change the interval values for each. Both LEDs will blink independently of each other.

Check out this list of millis() examples: https://www.baldengineer.com/millis-cookbook.html
There are examples to create a Police Light Strobe Effect, Time your Code, Change the ON-time and OFF-time for an LED, and others.

At first it seems that using the millis() function will make a sketch more complicated than using delay(). In some ways, this is true. However, the trade-off is that the sketch becomes significantly more flexible. Animations become much simpler. Talking to LCDs while reading buttons becomes no problem. Virtually, you can make your Arduino multitask.

After working through these exercises, check out this article on how to avoid rollover or reset mills().

Category: Arduino
Disclosure of Material Connection: Some of the links in the post above are “affiliate links.” This means if you click on the link and purchase the item, I will receive an affiliate commission. Regardless, I only recommend products or services I use personally and believe will add value to my readers. I am disclosing this in accordance with the Federal Trade Commission’s 16 CFR, Part 255: “Guides Concerning the Use of Endorsements and Testimonials in Advertising.”