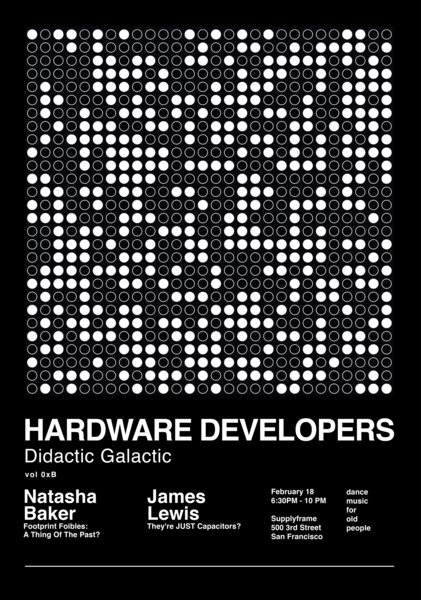 Super excited that I’ll be speaking at this month’s Hardware Developers Didactic Galactic (HDDG) #11. The meetup is on Thursday, February 18, 2016. It should come as no surprise that I’ll be talking about capacitors–something I have a bit of experience on.

Also presenting will be SnapEDA CEO’s Natasha Baker. I’ve written about SnapEDA in the past post, How to find Parts for your Electronics.

One reason to come is just to see what the Hackaday / Supplyframe office looks like!

Hardware Developers Didactic Galactic is learning group focused on developing electronic stuff. Educators, professionals, hackers, makers, entrepreneurs, and anyone else with the intended goal of teaching people discuss a theme around a topic.

Idea sharing happens through problems, challenges, lecture, discussion, and hands-on. On-site there are resources for soldering, testing, programming as needed.

Attendees have an option of giving a 2-minute talk on anything they want. Need help with a circuit? Have a project to show off? Want to introduce yourself? No problem.

As of this posting, there are 12 seats available on the HDDG #11 meetup. So if you’re near San Francisco on the 18th, stop by and learn about footprints from Natasha and capacitors from me!