AddOhms are Electronics Tutorial videos that teach using simple language on simple whiteboard diagrams. The videos come from the YouTube channel “AddOhms” which has over 65,000 subscribers, +2.5 million watched minutes, and 98% thumbs-up!

Also included is an Extras DVD with alternate footage, older (non-Addohms) tutorials, and some behind the scenes stuff. 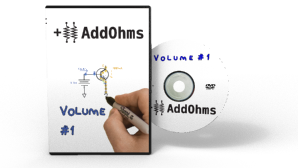 If you don't find these videos helpful or worth every penny, let me know and I'll refund your money.

No problem. No Questions Asked.

What Others Are Saying...

"This best DVD ever produced!" - My mother

"The use of white-boarding and animated graphics help to explain concepts that are sometimes difficult to understand. " - mkurdziel